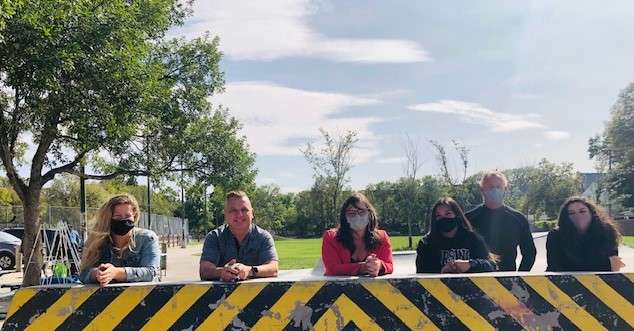 Some motions wind their way through council more slowly than others.  This is the case of the motion to right a longstanding wrong with respect to the structural support for two outdoor Broadway Neighbourhood Centre amenities on city land:  the BMX bike flow /skateboard park and the outdoor ice rink in West Broadway.

Like a climax of a Hallmark Movie the city found a way last year to provide one time only insurance in advance of the much loved Broadway Neighbourhood's "Snowball".  While the rink was flooded in the nick of time - the quick fix hasn't lasted. The same type of insurance issue plagues the BMX bike flow and skate park all year round.  It is another city built, city amenity on city property.

Why should a higher need neighbourhood pay for insurance when other similar amenities like Cindy Klassen, or Chornick Park skateparks are bought and paid and insured for by the city you may ask?  I don't know.  Unfortunately, council chose to lay the matter over to hear directly from administration in advance of the vote.  This may be fair, to need more time. However I'm not patient and wish to see the matter resolved.  I will note the positive:  so far the motion has been met with unanimous support at each community committee; standing policy committee and executive committee.

The motion in full goes back before council in the regular meeting next month:

WHEREAS West Broadway neighbourhood is defined by the City of Winnipeg as a ‘higher need
area’ with a majority of residents falling below the Statistics Canada National Household Low
Income Measure with disproportionately more vulnerable people especially children and seniors;

AND WHEREAS the Broadway Neighbourhood Centre (BNC), Inc. is a Winnipeg based nonprofit organization committed to providing programs and services the West Broadway’s higher
need community requires, including free high-quality recreational, social, educational, and
employment services for the youth and community members;

AND WHEREAS BNC is located on city owned property, and BNC acts as a city service vehicle
delivering community services in an integrated manner with other City resources;

AND WHEREAS the City provided funding for, and facilitated the construction of an outdoor
rink, skatepark and BMX bike flow all on the subject property, but the City is not acknowledging
them as City property and has directed the BNC that it must acquire private insurance in order to
permit the use of any of them;


THEREFORE BE IT RESOLVED: